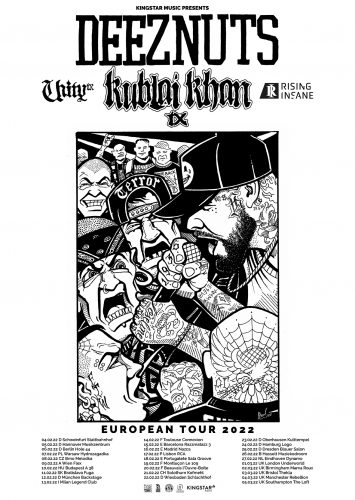 “Due to ongoing Covid restrictions, we unfortunately have to cancel our upcoming German shows and the postponement of our European dates.

We were looking forward to finally making these shows happen but at this point it is out of our control.

Due to scheduling conflicts with planned summer shows, we couldn’t reschedule the German shows. We are working on making it up to our German fans though, so stay tuned.

“You Got Me Fucked Up” is the album DEEZ NUTS needed to write. JJ Peters (vocals) explains: “It’s the breath of fresh air that we and our fans have been sorely missing. The thing that stands out the most about our songwriting, our performance and vibe on this whole album: We finally got our party sound back, but not in the sense of beat to death ‘party’ lyrics. These songs just scream fun.”
DEEZ NUTS deliberately picked different locations to write and record the album, despite sticking with Andrew Neufeld (Comeback Kid, Sights & Sounds) as co-producer. “This time we wrote in Toronto rather than New York City and recorded in Los Angeles rather than Boston like we did on the last two albums. The difference the surroundings brought to the album are very much felt throughout its ten bangers.”
“You Got Me Fucked Up” is just that: ten bangers. There are no 20 second humorous songs, but it is ten well-written and well-structured songs. “Some people subscribe to the ‘if it ain’t broken, don’t fix it’ philosophy. Mine has always been ‘if you don’t evolve, you die’. I couldn’t wait a second longer to put that into play with DN using this new album as the vehicle.” According to Peters “You Got Me Fucked Up” is the most important album in their discography since “Stay True” – and he cannot wait for you all to enjoy it!
The three singles the band chose all play a valuable role in introducing this album to their diehard fans and hopefully they will be welcoming some newcomers and possible fence-sitters, too. “Crooked Smile” is as catchy and infectious as it is pissed and menacing, a perfect lead in. “Singalong” is possibly the most DEEZ NUTS for those who fear change. “It’s our old familiar sound on steroids and laced with melody”, say Peters. “Bitterest End” lets you know that you can expect the unexpected throughout this album. “It is taking our sound and songwriting to brand new places, but in a very DN fashion.”
Short after the release of “You Got Me Fucked Up” DEEZ NUTS will embark on a European tour with Lionheart, Kublai Khan, Obey The Brave and Fallbrawl. A tour that Peters is very much looking forward to: “We’ll be on the road with the homies… in Europe this November, enjoying these songs in the live arena for the first time ever, please don’t miss these shows, they are gonna be one for the books, and the start of our next chapter.”

“You Got Me Fucked Up” is available as: Ltd. CD Digipak, LP+CD and Digital Album.