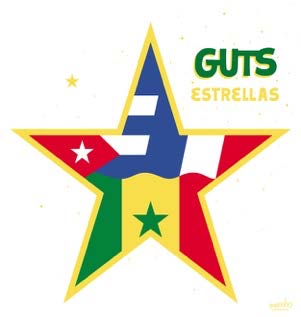 A poet of the last century once wrote: “The world is everywhere”. A 21st century musician confirms that it is everywhere, but in some places more than others. GUTS has gathered the world at La Boutique, a beautiful studio opened a few years ago near Marina Bay in Dakar, Senegal. Not only does Africa resonate there, but also the turbulent music of Cuba and the connivance of European musicians. Three worlds, three musical cultures, “three delegations”, as the beatmaker and producer says, who brought them together out of a desire to share, explore and meet.

Since he produced the smiling, humanist funk of Alliance Ethnik in the 1990s, GUTS has never stopped weaving these links that untie borders and exclusions, from project to project and from album to album. With “Estrellas”, he explores this human and cultural geography which proves most forcefully the resilience of peoples and pleasures. The triangular trade threw millions of enslaved Africans to the New World. On the island of Cuba, in particular, their descendants developed a radiant musical culture that was neither black nor white. Melodies, rhythms and radiantly Creole harmonies which, long after the abolition of slavery in the Americas, fascinated Africa, infatuated with the mambo, the chachacha and the Cuban rumba. GUTS was unable to bring together the music of the three continents in Cuba (remember the quarantines and all that?) but, with tireless persistence and the help of favourable circumstances, he was able to bring the three delegations to Dakar for a feast mixing genres, languages and affiliations in a profuse and lavish album – “generosity is one of my faults”, admits Guts.

Among the Cubans, pianist Cucurucho Valdés, nephew of Chucho and an encyclopaedia of Latin forms, and four voices: Brenda Navarrete, singer and percussionist, Akemis Carrera, the Aretha Franklin of santería cubana, El Tipo Este, a key rapper from Havana and José Padilla, a grandfather from Santiago de Cuba. And the beatmaker/producer/multi-instrumentalist Kumar Sublevao-Beat, a Cuban from Europe, was a ferryman…

On the African side, we needed a sensitivity to the Cuban music that has been making the lively and elegant dance for decades. So the guitarist René Sowatche from Orchestra Baobab, the bassist
Christian Obam, a Beninese-Cameroonian-Congolese brass section and two voices with Assane Mboup and Alpha Dieng. And the Europeans, GUTS’ long-time accomplices, are very diverse – Mr Gib, David Walters, Florian Pellissier, Cyril Atef, Pat Kalla, Djeudjoah & Lieutenant Nicholson, Al Quetz, El Gato Negro, Arnold Moueza….

Twenty-five artists in total for fifteen days of fire in a weightless studio between several languages, several continents and several memories. An adventure of connections and effervescence that defies the tragic history of peoples.