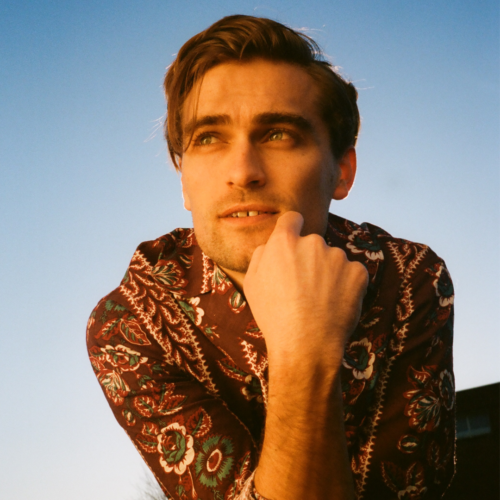 “When was the last time you went away, completely alone?” Rhys Lewis asked, genuinely excited to hear the answer. He poses the question to explain the root cause of his latest album – an album that needed to step away and be alone, before feeling truly alive again. Rhys was met with the usual response, “Never”. “Exactly”, he looked more serious than before, “Exactly”.Rhys Lewis boasts anthemic songs that have sound tracked the nation’s heartbreak, on the hit TV show, Love Island. After catching the public’s attention with numerous songs that were selected for the show, Rhys was ready to redirect his narrative away from love’s past. Whilst feeling claustrophobic and somewhat confused in the centre of the modern world, he took himself off to the Lake District for a solo venture. No phone, no technology, just a good old map and endless greenery to be discovered. As an individual that feels increasingly disconnected in an online space, it was here that he could finally see the need to reevaluate his life. Having slowly lost the confidence to identify as a musician, this album helped redefine ‘musician’, for today’s Rhys. Growing up in Oxfordshire, he refined his musical talents front of stage. Singing at every gig night and wedding he could find, Rhys, his twin brother and best mate scurried around the country in their Mini Micra. It’s this side of the industry, the live and the predictably unpredictable, that set Rhys’ sights on life as a musician. During three years at the London Centre Of Contemporary Music, Rhys obsessively chopped up sounds and refined production techniques in his bedroom. Frequently surrounded by mattresses to make a DIY recording studio, Rhys worked on sound bites that would financially fuel his dreams of a life on the stage.

Fast forward to last years’ songwriting session on a little plot of land owned by some “eccentric pub-style landlords” in the Fens. It was here that Rhys brought these ideas of sophisticated discovery to life for his second album, Corner Of The Sky. Prominent in Rhys’ mind, as he embraced bare feet on nature’s soil for weeks on end, was the idea of running away, making the mistakes he’d long avoided and starting again. It was a persistent theme for Rhys as his 20’s continued and he woke up to “the same day over and over again”. Spring had just kicked in when Lewis and his producer partner Aidan Glover arrived in The Fens, and the warm countryside sky spread far, with daylight blues and evening stars that went on for miles. Rhys worked to capture the appearance of opportunity, alongside change, on the new album.“I’d watch the sun rise every morning and every evening I’d go out with a whisky and watch the sun set,” he says, remembering. “Because the land out there was so flat, as you looked outside in the morning, there’d be an expanse of blue sky. It all became this feeling for me. The whole place: a big sky.”

For a decade before, Lewis had been shacked up in the heart of the capital city. As 2020 stretched out in front of him, a differing path beckoned. He needed the triumphant, runaway and re-do your life anthem that he was days away from penning. This track, Alone, one of the new album’s lead singles, craves for the freezing, liberating touch of the ocean.Whilst on these trips, Lewis knew he didn’t want to return to London, “I didn’t feel free there anymore”. So, when the time came, Lewis and Glover decided that rather than return to London, they wanted to keep the momentum going by “bubbling” together in Cambridgeshire, where they wrote music, played board games and contemplated life. “We both slept in caravans, it was amazing,” explains Lewis. “It was such a different environment, it immediately put us both in a completely different headspace. There are songs we formed out there that have become the backbone of the record.”

Due to the welcomed change in landscape, those weeks writing and living in Cambridgeshire became incredibly reflective. A reflection that would not have been possible in the life Lewis had left behind. With this, Lewis began to head down new pathways – driven by restlessness, searching for life and light – all of which spearhead the record’s themes. Like, for example, Happy Fucking Birthday – a “coming of age song that represents a change of perspectives and a new philosophy on life”. Or To Be Alive – a track cut from a cloth of ruminating on life’s purposes.For Lewis, the time at the caravan became strangely and uniquely blissful. It marked considerable change in his life, a maturity that he hadn’t realised he needed. Within these new perspectives on what’s important in life, came an increasing sense of freedom that directly altered Lewis’ devotion to daily, urban routine.

The album name draws back to the well-known coastal plains found in The Fens and how those countryside skies seemed full of such promising dreams. The record asks if dreams of meeting the right person in the right place – despite the hurdles life throws at you – could, in fact, change it all.“It was this sense of beginning to dream – and not about career or travelling the world, but about a future with someone. It felt like a really distinct change in me,” he says. For Lewis, Corner Of The Sky is a place to dream without boundaries or societal judgement. Building upon the warmth of previous records, Corner Of The Sky also sees Lewis leaning into an in-the-moment recording process. When the time came to record the tracks, Lewis and Glover headed initially to their shared space in South Bermondsey, Talbot Studios, and then to Rimshot Studios, in the North Kent Downs – a venue with the space to tinker around with larger scale set-ups and different recording styles to previous Rhys Lewis outings. Rather than tracking takes, there were playful recordings that captured Lewis’ exuberant live energy.“It became less about thinking about the music, and more about feeling it,” says Lewis, speaking of the album’s elevated, warm and connected sound. “We were feeling how the guitar and drums responded to the bass player”. Then, suddenly, he says, “you’re thinking less about the technicalities, and more ‘this just feels right.”To him, Corner Of The Sky is about wanting to make the most of the experiences we have, connecting with one another through something more than social media, but in the present moment – in the here and now. It’s a devoted love-letter to the art of eloping, an uplifting offer to be “lost in a moment”, a remedy for increasing, suffocating day-to-day fear. As Alone says, it’s never too late to lean into new experiences – this album is your invitation to them.