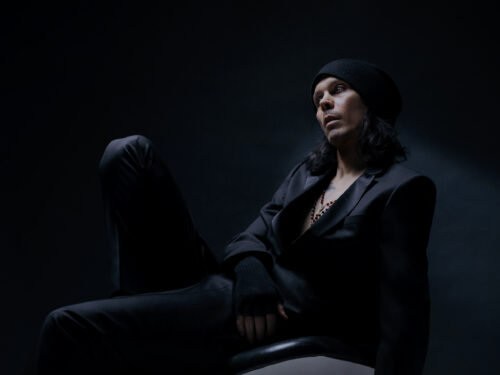 Ville explains, “As fun as the funeral rites for HIM were, it took me more than a few moons to lick my wounds in the shadow of the Heartagram and come up with an excuse to strum and hum again. Eventually I decided to put a leash on my beloved black dog and we started howling together instead of barking at each other. That’s how Loveletting was born”.

“Loveletting” will be made available across all digital platforms from midnight tonight (local time). An official video clip will follow tomorrow @ 17:00 CET, HERE.

VV‘s debut album Neon Noir is scheduled for release in early 2023; belonging to the same forlorn world of woe and whimsy once conceived and governed by Valo in HIM, VV arrives with additional nuanced notes of a fine aged Cabernet.

Ville adds, “Artistically speaking the main difference between HIM and VV is the extra line in the Heartagram, but what an exquisite line it is! It’s the Mamas and the Papas dressed up as Metallica on their way to a Halloween bash at the Studio 54, and now who wouldn’t want to witness that?”

Further details around Neon Noir will be released in due course. In the meantime, fans are invited to any number of VV’s headline tour dates taking place next year across Europe, the UK and North America.

Naturally starting in Helsinki, Finland, the 2023 extensive run reaches the UK in March, before heading to America come April.