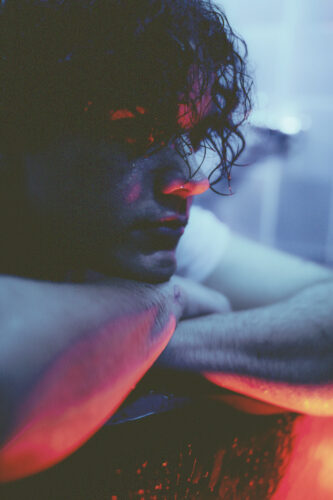 If you’re ready to be heartbroken, there’s no better soundtrack than the one Alexander Stewart provides. The Los Angeles-based singer and songwriter has already cut an impressive figure with his skyscraping pop sound, filled with emotional honesty and marked by his unforgettable voice. With a new single on the horizon and plenty of new music to come, Stewart is an artist who’s only just begun to embrace their unique, soul-stirring talents.

Music has basically been a part of Stewart’s entire life. The Toronto-born artist sang in choirs from an early age, and as he got older he was drawn to the buzz-building YouTube covers created by artists like Shawn Mendes and Charlie Puth. Inspired, he hit the recording studio with a friend and got to work on honing his craft throughout high school, eventually sparking viral gold with his take on Camila Cabello’s “Havana.”

As Stewart continued to build a following on YouTube, he set his sights on taking his music career to the next level as he made trips to Los Angeles with the main goal of, in his words, “Building a platform so I could afford to make music on my own.” After finishing school, he relocated to the West Coast permanently and logged plenty of studio time while refining his songwriting approach, eventually breaking big with the effervescent 2020 single “Backwards,” which notched over 20 million streams and broke through Canada’s Billboard Top 20 chart.

Referring to his style of writing as “heartbreak music,” Stewart cites both the big, bold pop of Lady Gaga and Sam Smith’s elegant romanticism as his biggest influences. “I have this ability to only like people who don’t like me,” he jokes while talking about his songwriting inspirations. “I end up falling in love, and of course I get my heart broken. I’m always going back to those moments and writing songs about them, because the emotions I go through in those situations are so deeply felt—and when it comes to how people treat each other, it’s a two-way street, too.”
Since “Backwards,” Stewart has been on a roll with songs like “Echo,” “When You Love Someone,” and his propulsive latest single “Back to You,” which finds the singer capturing the first smack of a new crush as well as the heartache that accompanies it. “I’d only known them for four days, but I already felt like I was in love,” he recalls while talking about the song’s inspiration. “They led me on pretty intensely, and after I dropped them off from the airport, I never heard from them again. It was so surreal, and I’d never felt emotions so strong about another human being. Ever since, I have these emotional waves where I miss this person.”

And ultimately it’s Stewart’s goal to make music that anyone can feel something from, which is why he keeps his lyrics gender-neutral as well. “I want anyone to relate to what I’m singing about,” he states, “and I want them to feel accepted by my music—to know that they’re not alone as they’re going through it.” And as Stewart continues his ascent, he’ll doubtlessly reach many others looking for a connection in this world.