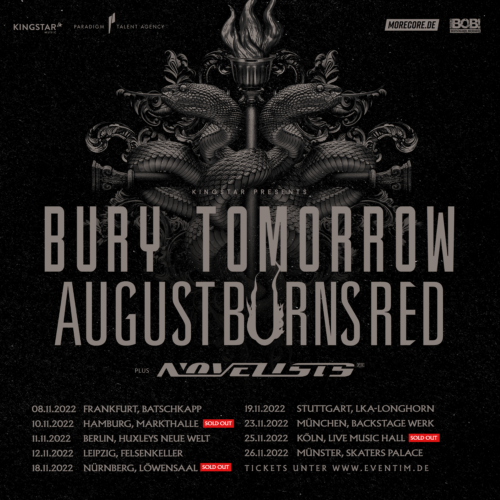 By whatever measure you care to use, Bury Tomorrow are among modern British metal’s upper echelon.

Long since established as one of the UK’s most successful heavy exports, the Hampshire quintet have performed on main stages at virtually every major European festival you care to name, racked up millions of YouTube views, scored two top 40 UK albums and sold tens of thousands of tickets to their incendiary live shows in the process. Shows which combine a passion, precision and uncompromising aggression that has become both a trademark and a badge of honour.

That they have achieved all of this, and much more besides, not by following trends or jumping from bandwagon to bandwagon, but by sharpening to a diamond-cut point their brand of punishing, yet effortlessly melodic heaviness, speaks of a character that few bands of any genre could hope to match. Indeed, it is this character, this unwavering spirit, that has earned them one of the most rabidly dedicated, dye-in-the-wool fanbases in the whole of rock music. A fanbase which has seen the band grow steadily across four pulverising records of unerring quality and ever-expanding ambition.

But something is about to change for Bury Tomorrow – the embers of steady growth are about to ignite into something much, much larger. The band pouring petrol on the blaze and starting an out and out inferno. ‘Black Flame’ is here, and it’s a record, and a movement, that’s going to spread like wildfire.

“Every single thing about this album is a huge step up for us,” instructs frontman Dani Winter-Bates. “We definitely aren’t taking any prisoners with ‘Black Flame’; now is the time to take the incredible thing we’ve been building for the last ten years to the masses at large. I know for a fact that this record has got the best songs we’ve ever written on it, songs that could exist in rooms and at festivals of any size. The ceiling of where we could go has shifted, and now it’s our time. It’s a record that came about from us asking ourselves the simple question, ‘Just how large could this get?’”

If the enigmatic vocalist’s question seems a little rhetorical, it’s because the answer is a simple one: as large as the band’s imagination dares to dream. Because whilst with ‘Black Flame’ they’ve crafted a body of work which retains their long held penchant for lacerating riffing and skull-crushing breaks, it also finds them overlaying a melodic sophistication and sonic depth that once again steps them up and sets them apart from the chasing pack. Ten tight, finely-tuned cuts that will resonate deeply with any genuine fan of the genre. It is a landmark record for both the band are the scene for whom they are flag-bearers. A fact not lost on the quintet themselves.

“We knew the expectation was going to be high this time,” nods guitarist and vocalist Jason Cameron. “It’s our fifth album, and our first on [legendary Sony imprint] Music For Nations, so there were always going to be eyes on us. But the writing and recording process for this record is the most considered and comfortable it has ever been for us.”

Indeed, holed up in Worcester’s stunningly scenic Vale studios with producer Dan Weller and engineer/long-term collaborator Mike Curtis, the five piece spent “weeks ripping apart songs and putting them back together,” admits Cameron. “We worked for a long time in pre-production to make sure everything was absolutely perfect,” he continues. “Dani and I worked incredibly closely to develop melodies and blends of vocal line that people wouldn’t necessarily expect, that step away from the tried and tested. There was never, ever a ‘that’ll do’ moment. The whole thing sounds gigantic, and at a technical level I feel like finally we’ve got a production job that does the songs, and our band, justice. This is big league stuff.”

Big league is right. The titular first single sets the band’s stall out from the get go with a chorus of sky-scraping proportions – Cameron’s voice lifting you up out of a hail of guitars before Winter-Bates jackhammers you back to earth with his imperious, feral roar. And if Bury Tomorrow have a reputation as riff-merchants of the highest quality, then ‘Black Flame’ sees them taking their mastering the craft to a new level entirely, offering up a veritable trucks load of chops that take notable cues from both the Gothenburg sound and the NWOAHM.

Elsewhere, the primal pummel of ‘More Than Mortal’ boasts the sort of outrageously obnoxious breakdown that will have chiropractors everywhere working overtime on the wrecked necks of legions of fans. ‘Stormbringer’, ‘Adrenaline’ and the apocryphally titled ‘No Less Violent’ all deliver the goods with thunderous aplomb. Make no mistake, Bury Tomorrow are definitely not writing songs for the radio – this is the sound of a band executing melodic heaviness at premier league level.

“We’re a heavy band,” laughs Winter-Bates, with the refreshing directness of a lifelong metal devotee. “We’re never going to be a radio rock band and there’s no compromise there. We’re doing it on our own terms: this thing is a freight train and I’ve never been prouder of anything we’ve ever put together as a band. It’s unapologetic, it’s pushing the envelope, and it’s a statement that shows exactly who we are as a band.”

And so, while Bury Tomorrow have never been the flavour of the month, have never been given a free pass, and have most certainly never had a red carpet of any description rolled out for them by the media at large, their integrity is about to reap a vast dividend four albums in the making.

“This album is about legacy,” finishes Cameron with a smile flickering across his face. “It’s the record that when this is all over, when it’s all said and done, people will look back and say that ‘Black Flame’ was the Bury Tomorrow album, that it’s an album that’s dug into the timeline of metal. I know this one is special. This one will stand the test of time. It’s our flag in the ground.“