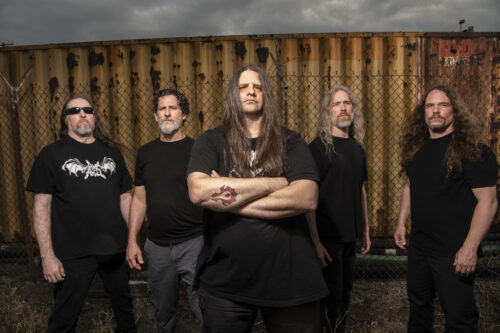 Violence Unimagined. The title tells you everything you need to know about Cannibal Corpse‘s fifteenth hellish opus. Comprised of eleven tracks, it is state of the art death metal played with passion and breathless precision, making for another flawless addition to what is inarguably one of the premier catalogues the genre has thrown up. “It really follows the path we’ve been going down for a few years now,” states bassist and founding member Alex Webster. “I think we approach the writing in a similar way most every time: each of us try to write the heaviest, most memorable songs we can. We want each song to have its own identifiable character. Showing my age, I like to say you can ‘drop the needle’ on any point of one of our albums and quickly tell which song you’re listening to.”

Ever improving on the genre they helped define, 2017’s Red Before Black stands as one of the highlights of their career. Following it up wasn’t exactly easy, but Cannibal Corpse have somehow managed to raise the bar yet again. The opening “Murderous Rampage” lives up to its title while the uglier than hell “Condemnation Contagion” practically falls over itself in its hurry to draw blood, and alternately, the lurching, catchy and gloriously chaotic “Ritual Annihilation” is pulverizing. While they continue to do what they do with aplomb, the one substantial change to Cannibal Corpse in 2020 is the addition of guitarist Erik Rutan to their ranks, joining Webster, founding drummer Paul Mazurkiewicz, guitarist Rob Barrett and vocalist George “Corpsegrinder” Fisher. Known for his roles in Morbid Angel, Ripping Corpse and most notably fronting the mighty Hate Eternal, Rutan has long established himself as one of the most dynamic forces in contemporary death metal. Simultaneously, he has built up a reputation as one of the most in demand producers in metal, having previously produced four Cannibal Corpse albums, alongside the likes of Goatwhore, Soilent Green and Belphegor. Filling in live on guitar since 2019, in 2020 he became a full member, contributing to the writing process. “I think the most noticeable difference on this record will be the addition of Erik to the band. He wrote three full songs for the record, music and lyrics, and his song writing and guitar playing have added something new, and I think his musical style integrated into ours very well,” Webster enthuses. This is not all that he brings to the band. “He’s a great friend of ours, so on a personal level, he’s been a perfect fit, as we knew he would be. Beyond that, he’s one of the hardest working people I know, in music or otherwise, and he maintains a high energy, positive demeanor in challenging situations where other people might go in a negative direction. This energy and great attitude rubs off on the rest of us as well. That’s really a perfect situation to have when you add someone to a band, or any kind of team: someone who’s great at what they do, and also inspires the people around them.” Already well known for the level of extreme technicality they bring to every record, on Violence Unimagined, Cannibal Corpse have further upped their game, particularly in Mazurkiewicz’s drumming. “I think we all pushed ourselves a bit technically on this one, with Paul probably pushing the hardest. This album is probably the most drum-intense album we’ve done yet. Part of that could be a result of Erik joining the band. His song writing style often features technically challenging drumming, probably owing to his years of experience in high speed death metal.” And with typically dark and warped lyrical content, Mazurkiewicz came up with the fitting title of the record, “summing up what the band is about in every facet, and taking violence to another level of extremity.”

With Rutan in the band, having him produce the record was a no-brainer at Mana Recording in St. Petersburg, FL – his central base of operation. Using the studio for pre-production, rather than their rehearsal space as usual, was a great benefit early on, allowing them to come into the actual recording process better prepared than ever before. However, their plans to record the album entirely together were interrupted by the Covid-19 pandemic, with Webster forced to record his bass tracks in his home studio. “I live on the other side of the country now, and that hadn’t been an issue prior to the pandemic, I was still able to go to Florida whenever I needed to. So, I was scheduled to fly down for the recording in early April 2020, and of course that was at the very beginning of all of the lockdowns and travel restrictions in the USA, so I didn’t go. Fortunately I have a lot of experience recording bass tracks at home, so it didn’t affect the sound of the album at all. I stayed in close contact with Erik and the other guys throughout the process, and it actually wound up being quite smooth. Of course I’m looking forward to tracking in the big studio with the guys for the next album, but I’m glad this option worked well for us.” And it would not be a Cannibal Corpse album without striking artwork from Vince Locke, and Violence Unimagined is no different – this time, the cover featuring a mother eating her own baby, though Webster concedes that for censorship reasons, they have had Locke do a complimentary piece that will be more widely released.

Now in their thirty-second year of existence, Webster still has the same hunger to tour, and though unable to do so while the Covid-19 crisis continues, the bassist hopes that not too much more time passes before they are able to get back on the road. Regardless, he is looking ahead and not to the band’s past. “We’re very excited to continue this new chapter of the band with Erik on board. I think that a band should always be working to improve and trying to make whatever they’re currently doing the best thing they’ve done, so that’s what we’ll do.”