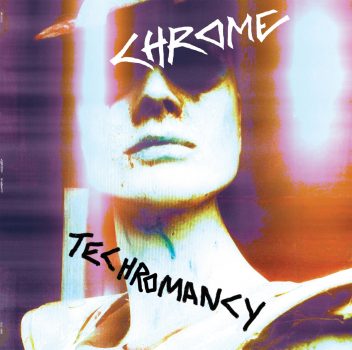 Seminal avant-punk psychedelic outfit Chrome are considered to be the „Godfathers of what became the Industrial Rock movement“ (Wikipedia) due to their groundbreaking experimentation in sound and raw energy.

They „started a revolution in music“ (Rockerilla Magazine, Italy 2011). Chrome is known for their de/re-construction of rock and roll, innovation, weirdness, found sound samples, hooks, pile driver rhythms and Helios Creed’s signature effects laden, Hendrixian, lysergic, layered guitar work and vocals. Their blend of raw energy and mind-bending audio manipulation influenced a wide range of musical genres, from the avant-rock of Sonic Youth and the Flaming Lips to Industrial rockers like Nine Inch Nails and Ministry. Theirs was „a Cyber-Punk vision of the future that came a decade before the term was coined“ as psychedelic connoisseur Julian Cope put it.

The band was founded by vocalist/drummer Damon Edge in 1975 who was highly influenced by proto-punk pioneers such as the Stooges, as well as the sound art experimentation of John Cage. The original line up included Gary Spain on vocals & violin, John Lambdin on vocals, guitar & bass, & Mike Low on guitar, synthesizer & bass.

Guitarist and vocalist Helios Creed joined Chrome in 1976, replacing their original guitarist. On recordings he played bass as well as guitar and composed songs with Edge, coming in to make their commercial and artistic breakthrough Alien Soundtracks Chrome’s 2nd album. It became an immediate underground hit and it and their next album Half Machine Lip Moves have remained classics.

Creed and Edge comprised the main creative force behind Half Machine Lip Moves, as the other founding members left. Says Julian Cope, “Nobody ever started an album with as much fire as Chrome did with the opening of Half Machine Lip Moves…[It] remains my favorite beginning to any rock n’ roll record, surpassing even Iggy and the Stooges’ Raw Power.“ In it Chrome continued with Alien Soundtracks’ Sci-Fi-Punk, collage of searing rock with noise, sound-bites, scrap-metal percussion and unusual manipulations of their instruments and amplifiers, but it was executed heavier with Creed’s guitar feedback and Edge’s powerful drumming to the fore.

Chrome then signed to the UK’s Beggar’s Banquet for their forth and fifth albums Red Exposure and Third from the Sun, the later which included contributions from Fabienne Shine of French punk sensations Shaking Street. They were joined by John and Hilary Stench for live shows. They also released 5 EP’s and singles on various labels from ‘79-82. Then Edge and Creed parted ways and Edge continue solo to release several more Chrome albums.

The classic Chrome albums sealed Helios Creed’s reputation as a legendary guitarist who „exploded the possibilities of what psychedelic, punk, new wave and industrial rock could sound like with his guitar work in Chrome [and] is one of the greatest guitarists of all of rock music” stated Andrew Stecz in 2012 in Examinar.com. Helios Creed established himself as a unique and powerful solo artist, touring extensively and recording prolifically. He continued to be an influence through the Grunge and Noise Rock indie scenes and toured with Nik Turner’s (Hawkwind) band “Space Ritual.’ Creed turned out 21 solo album and several singles in his own right, from 1985 to 2011, including 2011’s Galactic Octopi reviewed by Rockerilla Magazine as „one of the best he’s ever made”.