DANCE WITH THE DEAD 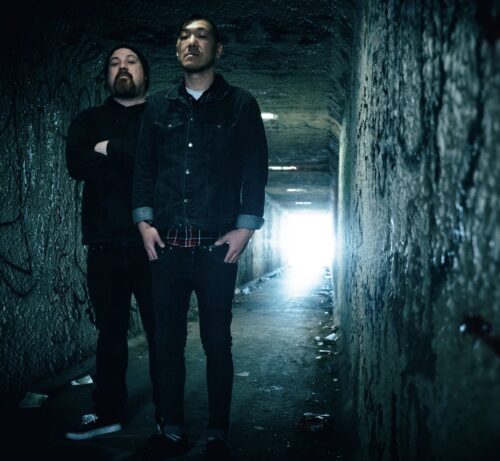 Dance with the Dead is an electronic based music duo by Justin Pointer and Tony Kim.  Inspired by retrospective movies and music from the 60’s, 70’s and 80s, their sound reflects heavily on the analog synthesizer sounds, and early heavy metal guitars.  They released their debut record “Out of Body” on October 31st, 2013 to great reviews in the synth, metal, and EDM communities alike.  They quickly followed up with the EP “Into the Abyss” four months later to which had a darker vibe and exploded their ability to write orchestral score pieces.  August, 2014 saw the second full length release titled “Near Dark” which furthered their pressing stamp on the synth scene with such cross over hits like “Andromeda” and “Invader”.  Going against normal record cycle rules, they released yet another EP release titled “Send the Signal” in December 2014. They played their first live show in January, 2015 in Los Angeles CA, and decided to pursue Dance with the Dead as a live performance act and not just a studio duo.  By November 2015, they were headlining shows in their first European tour.  February, 2016 saw the anticipated release of their fifth release and third full length record “The Shape” with great reception and buzz.  By September of 2016 they were headlining shows all over Eastern Europe as well as the USA.  In January of 2017, they released the full length record “B-Sides: Volume 1” which was composed of unreleased material written between 2012-2016.  The summer of 2018 saw the release of their fourth official full length release “Loved to Death”. As of early late 2019 the duo has toured and headlined shows in USA, Canada, France, Belgium, Germany, Iceland, Russia, Belarus, Riga, Talin, Scotland, United Kingdom, Ireland, Netherlands, Czech Republic, and Ukraine.  The duo plans to release a new EP of music in early 2020 and continues to tour worldwide.