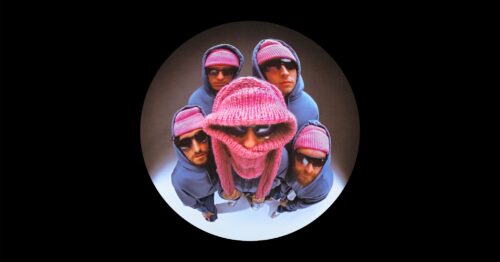 “Hi everyone,
We’re really sorry to say we’ve made the difficult decision to cancel our European tour planned for March. Unfortunately, circumstances mean that we can’t make it work this time around 🙁 We’ll do our best to make it out to the continent for festivals and hope to see some of you there.
Love to all of you who have already bought tickets. We’re sorry and want to say thank you as always for all your support.
Ticket holders will be contacted shortly and refunds will available at the point of purchase.
Easy Life x”

easy life’s second album, ‘MAYBE IN ANOTHER LIFE…’, is a story about silver linings, and making sense of the world – fitting, given the sudden grounding the band experienced amid the global pandemic. “A central theme with us has always been escapism: rather than just say ‘life sucks’ we’re all about celebrating what we have,” explains frontman Murray Matravers. This time, easy life had to put their own ethos to the test – resulting in a heartfelt, melancholic, and uplifting record that will challenge people’s expectations as the band scales euphoric new heights.

After their much-loved debut ‘life’s a beach’ charted at number 2 last year, the band (which also consists of drummer Oliver Cassidy, bassist Sam Hewitt, guitarist Lewis Alexander Berry and keyboardist/percussionist Jordan Birtles) performed a run of sold-out shows including 2 sold out nights at London’s O2 Brixton Academy, plus an arena show in their hometown of Leicester. Their gigs were sweaty and carnal, heady and dizzying affairs, with Murray’s shank-sharp observations about the minutiae of modern life cutting through the chaos. But as ‘life’s a beach’ rolled out, and the world fell for easy life’s conceptual love-letter to the gunmetal skies and roughly-hewn coastlines of the British seaside, Murray was grappling with the impact of the pandemic; the lockdowns that were clipping the band’s wings, every time they tried to soar. Like the submerged car bobbing on their debut album artwork, it was hard for easy life to tell whether they would sink or stay afloat.
Finding the silver lining was harder; Murray felt rootbound in his London flat, so he upped and moved – twice – which included spending six months living with his girlfriend’s parents near Hungerford, Berkshire. Meanwhile, the band was scattered to the wind. Oliver went to work with his brother-in-law on a building site. Lewis went to work on his dad’s farm. Jordan went to study graphic design. “Sam went and bought two greyhounds,” Murray recalls. easy life knew that when it was safe to reunite, they would. But it didn’t make being apart any easier. “Maybe because of where I was in my own life, I was feeling pretty fucking depressed and anxious through most of 2021,” Murray says. He was determined to keep himself anchored, and making music was the only way to process the changing world.

‘MAYBE IN ANOTHER LIFE…’ became a vessel for all Murray’s feelings and fears, mirroring the anxieties of a generation emerging from the pandemic into an altered reality. “I was trying to create a world which is better than the world we inhabited at the time,” says Murray. In many ways, ‘MAYBE IN ANOTHER LIFE…’ is also a full-circle moment for easy life: a band who formed with the hedonistic outlook of “no regrets”, now learning to live with and grow from them.