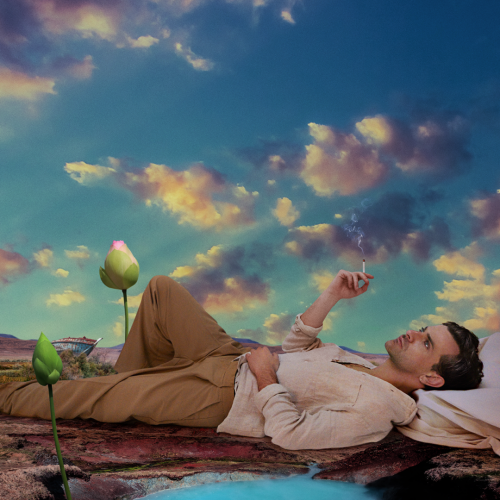 What does the perfect Josef Salvat pop song sound like? It’s a question that’s been troubling the Australian-born, Paris-based singer-songwriter for years now. He got close to finding the answer on his two major label albums, 2016’s classy debut, Night Swim (featuring the glorious Open Season and his delicate cover of Rihanna’s Diamonds), and last year’s Modern Anxiety, a ten-track collection that further solidified Salvat’s ability to channel emotions into textured songwriting and heartburst melodies. But it was on galloping new single I’m Sorry – the lead track from his forthcoming third album, Islands – that he finally hit the jackpot. Launched skywards by a propulsive, pogoing synth pulse, it marries an anguished lyric (“I’m sorry for failing, sorry for making such a mess of things” runs the chorus) to the sort of high-octane BPM that makes you feel instantly delirious. Think The Weeknd’s Blinding Lights given a cold wave retwizzle. It’s a bold statement of intent from an artist finally hitting his stride. “I’ve always loved I’m Sorry but we never nailed the production,” Salvat says of a song that set the template for the album. “I wanted to make a record I’ve never had the confidence to make before, which was unashamedly pop. That you could dance to and it was fun.”

It was that word “fun” that Salvat felt was missing from his output so far. “Melancholy is addictive,” he says. “I would dance onstage but if you put me in a studio and ask me to make a dance record I’d be like ‘this isn’t my wheelhouse’.” While there are bops and bangers mixed in with the ballads on his first two albums, the bigger, poppier songs were often sidelined due to imposter syndrome. Or a lopsided obsession with integrity. After parting ways with his label Sony last year, Salvat suddenly felt like the shackles had come off. He no longer had to prove anything to anyone but himself. With Islands originally planned as the second part of Modern Anxiety, his changing label situation (he’s now signed to independent, Leafy Outlook, who last year released his lovelorn EP, The Close/Le Réveil), mixed with the more global concerns, released the pressure. “In lockdown I had a profound personal shift in terms of what I think is important and how I felt about time and other people’s expectations,” he explains. “I just thought ‘fuck it I’m going to make not the record I’ve always wanted to make, because there will be lots of records, but a record I’ve always wanted to make’. Also I started thinking about this album as not the second part of something but its own thing.”

Originally written as a ballad with regular collaborator Justin Parker (Rihanna, Lana Del Rey) back in 2013, I’m Sorry’s re-emergence as a dancefloor behemoth shaped the album’s direction. The album’s 11 songs, bar the lilting Sunbeams which was written last year in a Paris apartment, all existed in various forms but were given a fresh makeover via Zoom and later in Stockholm alongside I’m Sorry’s Swedish producer Joakim Jarl, AKA Jarly. “One practical reason for grouping these songs together is they stuck around,” Salvat says. “A lot of songs you write you get bored of quickly. Or you forget them altogether. These are ones I kept returning to. The reason they didn’t appear before is because I was too scared to put them out. They’re songs I felt were bigger than me. Particularly a song like I’m Sorry or Promiscuity. I was like ‘can I carry this off? Can I be this brash?’. They were all waiting for me to catch up with them.”

While the more off the cuff The Close/Le Réveil EP (“I wanted to put music out for the sake of it – it’s easy to lose track of what you’re doing music for”) pored over a life-changing breakup, Islands – which takes its title from the realisation that even in a couple, people are still their own separate islands – takes that pain and alchemises it into something approaching power. The bubbly, tropical-sounding So Lite sweetens the lyrical bitterness with production that feels suited to a sweaty club. Then there’s the 1975-esque, sex positive bisexual anthem Promiscuity (“sleeping with all the girls and all the boys” Salvat sings) and the electronic pulse of The Drum that Salvat describes as “super depresso espresso” but is at least soothed by its “it’s ok” chorus. “I think some of the best songs I’ve ever written are on this record,” he states. “Some of the funnest, freest music. Even when there’s sadness it’s more a wistful understanding. There’s an acceptance and forgiveness of past fuckery and moving on. Then on the other side it’s just fun. And it’s like who cares. None of it matters! Literally nothing fucking matters, we’re all going to be dust! So there’s a positive nihilism as well.”

The Drum, Salvat says, also carries an element of sarcasm that peppers the album. “I’m taking a dig at certain people in my life and also the culture in general, but I’m mainly being shady about myself and my own self obsession. It’s like ‘fuck off, man, you bore me’.” He lets out a broad grin. “But I love that mix of light and dark – I made it in Sweden with Swedes and they’re so good at that. Look at ABBA. Robyn. There are nods to that world for sure. And Swedes are very fucking dark but also very casual about that, and I’ve always written like that.” It also saturates the house-y Billion Faces, which calls out duplicitous behaviour but whacks a donk on it. “In the past I’ve worried about being too emotional, or being too heavy-handed, because it doesn’t convince me when I hear it or see it in art. I need it to be a bit more subtle. For the emotional punch to come at the right time.”

The latter crops up on the Robyn-esque Without You, an ode to trying to fill an emotional void, and the darkly brooding title track. “They say no man’s an island, but I think I am” Salvat sings, his voice scuffed with emotion. “That song is super angsty,” he says. “But then you have a one minute guitar solo at the end that’s ridiculous. Even if nobody else gets it, there is a lightness in all of this that I have never acknowledged. I didn’t see the humour in being bombastic before.” The one moment of pure peace, Sunbeams, offers a hint at where Salvat is headed. “I had a piano for an hour in Paris and I sat down and did that. It’s the most recent song and it’s a song where there is no pain. It’s about being in bed with somebody and the light’s cutting through the window onto the sheets and the panes of glass are cutting over your bodies and you’re in silence with someone but it’s not awkward. It’s a silence that fills you in a really positive way. Happiness is a choice and in that song I was choosing happiness.”

It’s that positivity that permeates Islands, an album full of angst, emotion and clarity. It’s also a record that feels energised, as if coming out of a long stasis. Which in a way it was. In fact, we all have. “There was an urgency that came from the lockdowns,” Salvat says, acknowledging the album’s physicality. “I would find myself dancing to stuff in my lounge room. And if an early demo didn’t make me move then I’d be like ‘no, it’s not working’.” Newly independent, Salvat was able to make those decisions by himself and with a palpable confidence. “I’m proud of all of my albums for different reasons,” he says. “But I think Islands is my best.” He’s aware, too, of the dichotomy at the heart of this new sonic breakthrough. “I’ve made the most major label album while not being on a major label. I think that’s because when I was on a major label I was really trying to keep hold of credibility.” He pauses, a new realisation flooding over him. “But I chose to have that now – I’m not waiting for other people to give it to me. I love pop music and it’s what I wanted to make.”