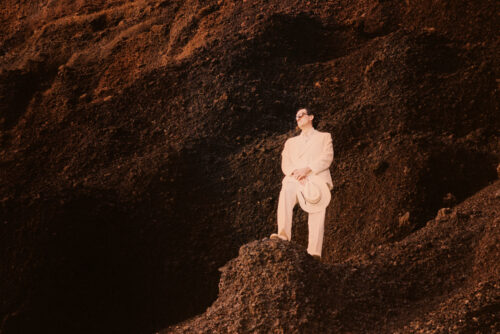 Koudlam was born in 1979 in Abidjan, Ivory Coast. He spent his teenage years between Africa, North Dakota, Mexico City and the French Alps. As a child, he liked to wander around the bush and imagine himself as a brave adventurer. His heroes were Charles Baudelaire and Jim Morrison.

Through middle school, he’d sing in rock bands that would exist for a week, until, aged 16, he was initiated to electronic music by pioneers of the rave scene. Soon, he was playing for weekends chemical audiences. Surrounded by samplers and drum machines, he wrote dozens of tunes recorded on a four-track tape. They are now all lost.

Today he returns to civilization with “Precipice Fantasy”, an album inspired by his own wanderings as well as the hallucinatory and romantic tales of 18th century adventurers who wanted to climb virgin mountains, walk through the realms of death just for glory, and to forget themselves…

The album will be released in two parts. The first part delivers a salvo of meteorites where the artist uses, as usual, standardized pop patterns to better disrupt them, without ever deviating from the ultimate melody, chanted until inducing trance.

The second part is an instrumental and contemplative record, a kind of music for an uncomfortable yoga session, that of a tourist who dreamed of climbing the Everest but lost the strength to get out of Kathmandu’s underworld.