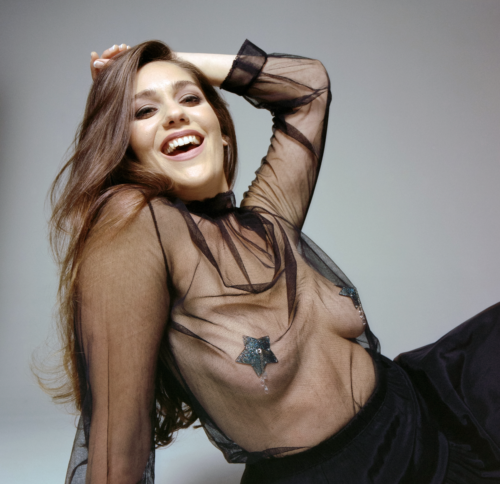 When you fill out the google form, the response will automatically send the zoom link

About the album Kirke said, “I am over the moon about sharing this album with people because I just think it’s such a good time and frankly I’ve felt a bit rude keeping all that fun to myself! It was inspired by some of the baddest women in 80/90s country, disco, and rock and designed to blend those references into the thing you didn’t know you wanted but do! Or maybe you don’t. But that’s probably ‘cause you’re square 🙂 Anyway I just hope people sing and dance and feel powerful when they listen to it.”

Kirke stands out like a flash of neon magenta in this nostalgic landscape of Americana tin-types. While many of her singing, songwriting peers look further back for inspiration, Kirke’s sweet spot is decidedly in the excess of the 80’s. Anyone only familiar with Kirke through her on-screen performances (Mistress America, Gone Girl, or Mozart in the Jungle) may be surprised by just how dazzling Lola-playing-Lola can be. Just a few lines into “Better than Any Drug”, it’s clear no written role could reveal more of Kirke’s wit, lust for life, and sense of humor than this record captures with the help of producer Austin Jenkins (White Denim, Leon Bridges).

Scheduled for release on April 29th, 2022 the 10-song sophomore full-length album showcases Kirke’s unselfconscious, country-twinged vocals alongside a brightly colored candy shop of glam-twang guitar riffs, department store tv commercial synth stylings, and swooping, lilting, unabashedly feminine background vocals. Lady For Sale channels a high-spirited insouciance that feels invigorating and familiar, decidedly more easy-going and fun-loving than what we’ve come to expect from its genre (and the world in general) in recent years. This is a party you’ll want to attend.

Born to a musical family (her father is Simon Kirke, drummer of Bad Company and Free), Lolaembarked on her own musical journey with her four-track EP released in 2016. An acclaimed debut album, Heart Head West, followed in 2018. Managing to juggle both music and acting – earning acclaim in both fields – she began to split her time between Nashville and New York to work on her Lady For Sale.