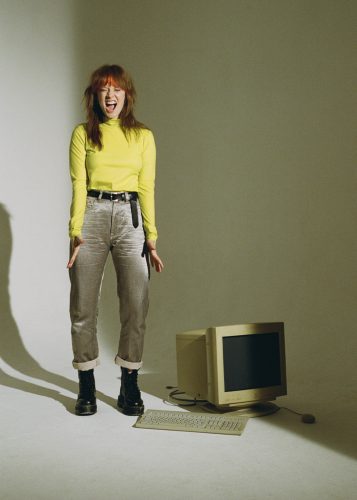 In a world where we’re taught to aspire to unattainable levels of perfection, Orla Gartland’s unfiltered honesty is a breath of fresh air. Balancing normal insecurities and a self-deprecating wit with impressive levels of self-reliance and steely determination, the Dublin-born, London-based singer-songwriter/producer has never pretended to be anything other than a work in progress, and – from 2015 EP Lonely People to forthcoming debut album Woman On The Internet – has always used her music as a vehicle for self-discovery. As that understanding deepens so too does the connection she continues to forge with fans, resulting in over 55 million streams and more than 750,000 monthly Spotify listeners to date. Though raised by music lovers, Gartland was the first in her family to play an instrument, taking up the violin aged 4 and learning traditional Irish folk music by ear. Obsessed with punk-inspired pop acts like Avril Lavigne, she taught herself guitar from the age of 11, and by 14 she was uploading original material to YouTube, her folky-sound influenced by singer-songwriters like Laura Marling, Joni Mitchell, Kate Bush, Fiona Apple and Regina Spektor. “Because I was way too young to play open mic shows, [sharing videos] became a valuable way to get feedback on my songwriting,” she explains, speaking from her home studio in West London.

At the age 17, Gartland self-released her debut single, ‘Devil On My Shoulders’, which went on to chart on iTunes. But it was her decision to leave Ireland two years later that was to prove pivotal in furthering her musical career. Deferring a place to study songwriting at Dublin’s BIMM Institute, she relocated to London to immerse herself in the industry, a move she describes as being inspired equal parts by “blind confidence, faith in the universe, and encouragement from the small audience I did have online.” In London, Gartland quickly found herself part of a tight-knit community of like-minded musicians including Dodie, for whom she plays guitar as part of her touring band. Having initially adopted a DIY approach out of necessity, Gartland has maintained that creative independence through choice, with subsequent EPs Why Am I Like This (2019) and 2020’s acclaimed Freckle Season both self-released, and the latter finding her fine tuning her production skills. “I realised one day that all my favourite artists have had a heavy hand in the production of their songs. So for Freckle Season I thought, ‘How can I make this the most jam-packed, concentrated version of me?’ And the answer was simple – I needed to be involved in every part of the process. It was like the more of a control freak I became, the more rewarding it was and the more proud I was of the music. I became obsessed with every guitar tone, every drum sample, every effect on my vocal – I dialled in every detail of the songs and it felt amazing not to have to rely on anyone else to record them. I had spent years searching for my dream producer only to realise I could grow into that role myself. Making Freckle Season really informed how I wanted to make the album.” Written during the first lockdown of 2020 at her studio in Acton, and recorded in October at Devon’s Middle Farm Studios with assistance from co-producer Tom Stafford and Gartland’s own two-piece touring band, Woman On The Internet represents a huge step forward for the 25-year-old. Today she cites Haim, Phoebe Bridgers and Strange Mercy -era St. Vincent as being particularly influential reference points, but the results are utterly unique, finding Gartland moving between alt-rock, punk, folk and synth-flecked pop, with a succession of inventive arrangements and insightful observations. Where Freckle Season charted the collapse of a long-term relationship, Woman On The Internet finds Gartland deliberately putting herself front and centre in all lyrical content. “It was good to get that out of my system,” she laughs of Freckle Season today, “Because I don’t owe that boy a whole album.” “When I was a few songs into writing the album it became clear that Woman On The Internet is about the chaos of my 20s,” she expands. “It’s a different chaos to your late teens, such a different brand of angst. I feel so much more settled and sure of myself now than I was when I was 18 or 19 but I’m still just half the person I’m going to be and to capture that became really important.”

As Gartland explains, the album title references a nebulous, self-help-type figure. “She’s a caricature; a nameless, faceless figure telling me to eat better or buy some specific hair product; when I feel low I’m so vulnerable to questionable advice. The woman appears in these songs as someone I look to for guidance when it feels like no one in my real life can help, when I’m truly lost. A lot of this album is about learning to really own that lostness.” The tone is set on album opener ‘Things That I’ve Learned’, which sees Gartland imparting hard-won wisdom over complex, clipped percussion, staccato guitars and close vocal harmonies including, “Take up all the space even the when you think you don’t deserve it,” and “Say what’s on your mind, every single time, don’t regret it.” Despite its seemingly damning title, ‘You’re Not Special, Babe’ is about taking comfort in the universality of self-doubt, and sets its self-deprecating musings to euphoric, synth-flecked indie-pop. WIth its dramatic dynamics and reverb-drenched guitars, ‘Pretending’ uses the setting of a party as an arena for exploring identity and feelings of isolation, laying bare Gartland’s own tendency to become a “shapeshifting, people-pleaser”. A friend’s rage threatens to bubble over during the breakneck punk of ‘Zombie’, and ‘More Like You’ frankly discusses Gartland’s own struggles with feelings of inferiority. Throughout, Gartland reinforces the importance of acknowledging these emotions, rather than repressing them and subsequently regressing into an even darker place. As she explains, this commitment to honesty stems not just from self-discovery but from a desire for genuine connection. “I’d love for people to come away understanding me more, but also it doesn’t have to be all about me. Even if it’s the odd lyric here and there, I’d love it if people felt more understood just by listening to the album.” And, ironically, it’s precisely by embracing and laying bare these imperfections that Gartland has created her most compelling work to date.