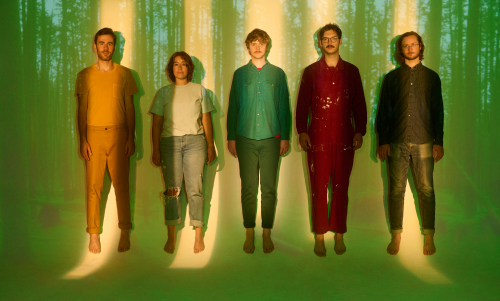 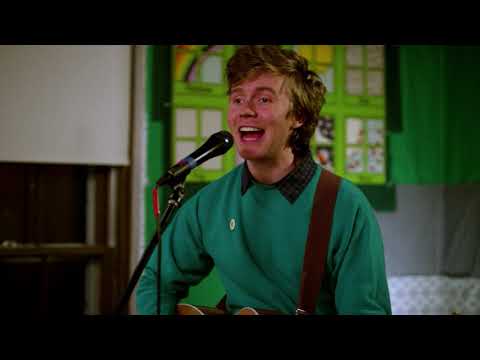 Evan Stephens Hall is big on multiple meanings. The leader of Pinegrove titled their sixth album 11:11
because of its layered significance: the numerals gesturing to a row of trees, or striped corduroy; the
cornfields of upstate New York, or people shoulder-to-shoulder. But it’s also a special time, a “wink
from the universe,” as Hall says, for those who witness it on the clock to wish for something brighter.
“Calling the record 11:11 should be a heartening statement, though there’s certainly a range of
emotion across the album. There’s much to be angry about right now, and a lot of grief to metabolize.
But hopefully, the loudest notes are of unity, collectivity, and community. I want to open a space for
people to feel all these things.”

The album sees the band build on their poetic blend of indie rock, folk, and alt-country, along with
Hall’s earnest, open-hearted vocals and his penchant for writing emotionally direct, literate,
introspective lyrics. Here, political and socially conscious themes permeate, and as he evolves as an
artist, his resolve has only grown stronger – and more purposeful. “I’m encouraged that so many
people in my generation are now on board for a change that centers people over profit. And most
urgently, I think, in order to durably solve the climate crisis we’ve got to address capitalism.” The
band’s latest effort weaves these critiques through an accessible and sensitive work, which manages
to be pointed without ever being didactic.

Noted producer and former Death Cab for Cutie member Chris Walla took on mixing duties, while
Hall and Pinegrove multi-instrumentalist Sam Skinner co-produced the LP. Hall credits Walla’s
impeccably placed arrangement ideas as a vital voice at the table, moving on from the “crisp and
contained” production on 2020’s Marigold, to more of a “messier” feel for these new songs. The
recording took place at two Hudson Valley facilities – the iconic Levon Helm Studios in Woodstock
and The Building in Marlboro – with Skinner and Pinegrove drummer Zack Levine at Hall’s side for the
process. Other collaborators in the band’s orbit –
Megan Benavente (bass), Josh F. Marre (guitar) and Hall’s father Doug (piano and organ) –
contributed in a combination of remote and calculated risk sessions.

The album is introduced with the mini-epic “Habitat.” A robust, textural masterpiece inspired by long
drives around upstate New York. Hall says that the dilapidated houses covered in plantlife that spot
the landscape have made an intense impression. “It’s hard to see that kind of recalibration, but at the
same time, there’s a primal irony in seeing nature win against our decaying structures. I drew
inspiration from that tension and those brambly textures with Habitat’s arrangement.” Hall continues
to investigate the natural world on the equally disquieting “Flora” and later, on the elegiac waltz
“Orange.” Centering on the climate crisis, the song spreads over the listener like a dream, with Hall’s
impassioned, rising vocals producing a near-hallucinatory realization that we may now find ourselves
at the end of history. It’s a call to affirm the community working towards a better world and to fight
through the cynicism. “These politicians who forget they serve us, they think they’re celebrities,” he
says. “It’s about the betrayal of the Democratic Party.”

Elsewhere, crushing ballad “Respirate,” urges us to look out for and love each other, while the
achingly beautiful “Let” points towards the sad, repetitive loop many of us find ourselves in these
days. “Time began to feel less linear, almost palindromic. Two steps forward, two steps back,” he
says. On the thunderous „Swimming“ Hall spins the scene of perseverance through a near death
experience, while a pilot is asleep at the wheel on the brash two-minute banger “Alaska.” The
gripping “Cyclone” battles with anguish, friction, and intrusive thoughts through biting guitars and
rattling percussion, while Hall describes spaced-out-folk album closer “Eleventh Hour” as “a phone
call with a friend that goes to abstract places.”
Pointing towards hope, love, grief, and anger, 11:11 seizes listeners with feelings of warmth, urgency,
and soulful beauty – even as it asks some of life’s most difficult questions – through hook-filled songs
that bury themselves in the senses and stay there. “The album spends equal time on optimism,
community, reaffirming our human duty to look out for one another even in the absence of the people
we expect to do those things,” says Hall. “What if we have to be our own salvation?”