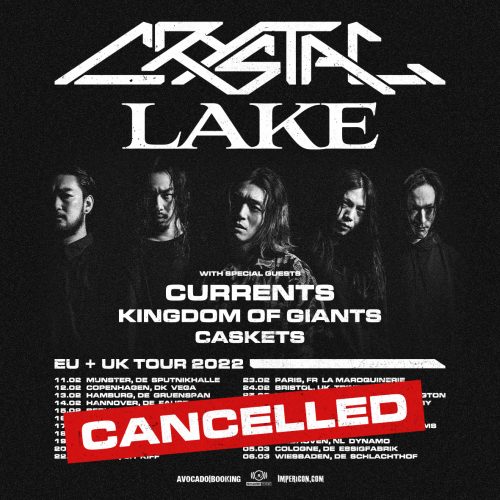 “Due to the growing number of Covid cases which are constantly affecting international borders and new travel restrictions popping up daily, we feel it is best that we cancel our February/March European headline tour and wait things out a bit longer before our return. We are very sorry, but we will be back as soon as possible. Refunds can be issued at the point of purchase.”

Hailing from Tokyo Japan, Crystal Lake saw its inception in the summer of 2002. 2006 saw the release of the band’s first full length album “Dimension”, which took them all over Asia with bands such as Parkway Drive, Hatebreed, The Ghost Inside and many others. After a few line up changes, with the introduction of vocalist Ryo and drummer Gaku in 2012, the EP “Cubes” came out in 2014, followed by more touring across Asia. In 2015 Crystal Lake signed with several overseas labels including Artery Recording to release their second full length “The Sign”, which was quickly followed by another album titled “True North” the year after.

Having built up a strong following in Asia over the years record after record, Crystal Lake’s overseas’ fanbase started to grow at a fast pace, taking them to Europe and the UK for the first time ever in the fall of 2017. After releasing their single “Apollo” late 2017, the Tokyo metallers kicked off 2018 with a Japanese headline tour with support from guests Attila. Their second Europe/UK kicked off in the summer, visiting 10 countries including festival performances such as Resurrection Fest and Jera On air, as well as some dates with Sweden’s Adept. Finishing off 2018 Crystal Lake released their single “The Circle” and made their 3rd visit to Europe/UK supporting Bury Tomorrow on their album release tour.

Crystal Lake’s newest full length record “Helix” will be released on February 15th 2019 and will mark the band’s label debut at their new home at Sharptone Records. Go experience Crystal Lake live, as they prepare for another exciting year on the road, including their first USA tour together with August Burns Red, Fit For A King and Miss May I in February 2019.