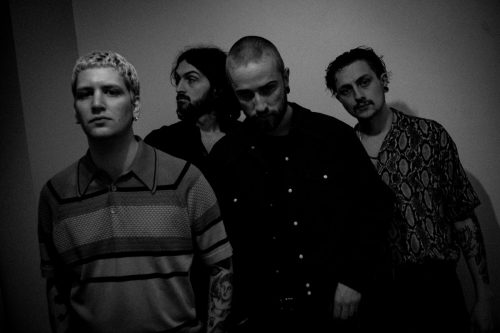 The rock heavyweights from Hastings stamped their name firmly onto the hide of the UK rock scene in 2019. Peddling a unique mixture of explosive riffs, bone-crushing live shows, and ear worming melodies of the duel-lead vocals and guitar.

Renowned for their live ferocious live shows, on stage is where Kid Kapichi really come alive. Fronted by Jack Wilson & Ben Beetham (joint lead guitar/vocals), with the other half of their ear-shattering sound emanating from George Macdonald (drums) & Eddie Lewis (bass). Having shared the stage with the likes of Frank Carter & The Rattlesnakes, Fidlar and Slaves; Kid Kapichi’s name is hot on the lips of the UK live music circuit.

Storming into 2019 with the aptly named titled track, ‘2019’ is a reflection of the current state of social and political affairs, and its impact on a voiceless generation. ‘2019’ was the first song to gain traction across the airwaves. Subsequent singles ‘Glitterati’ and ‘Death Dips’ received strong support Jack Saunders Indie Show and plays from Annie Mac, Steve Lamacq, Huw Stephens, Phil Taggart, Tom Robinson and more. ‘Glitterati’ was BBC Radio 1’s ‘Hottest Record in the World’ and ‘Death Dips’ featured on the BBC Radio 1 playlist.

With momentum building, Kid Kapichi dropped their hotly anticipated EP ‘Sugar Tax’ in July 2019. In the latter part of the year, the band made their mark at Reading & Leeds Festivals, sold out headline shows in London and Brighton, and toured Europe with Frank Carter & The Rattlesnakes in the autumn.